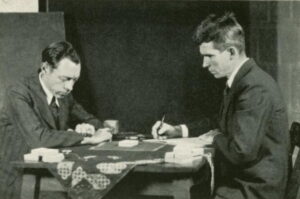 The early days of the Parapsychology Lab at Duke University formalized the study of ESP in a way that had not been done before. It worked out the details of how the subject could be examined, what and how questions could be asked, and what sorts of information could be gleaned from these studies. That careful and thoughtful process would be replicated in other labs and for other applications over the next many decades. One such research group was the team at SRI, Hal Puthoff and Russell Targ, that with funding from the military developed what would become known as the Stargate Project. The Stargate Project was tasked with studying and implementing Remote Viewing. Rhine had established that ESP at a distance was occurring, in his work with Hubert Pearce and Joseph Gaither Pratt in the early 1930s. As mentioned in an earlier blog, Upton and Mary Craig Sinclair had also found distance did not negatively impact PSI results.

One of the criticisms of early card guessing experiments was that the person guessing the cards could somehow see or get cues from the person choosing the cards. One solution to this was to have the cards chosen in one location, and the subject list the cards in order in another location, either in another room, or another building. Hubert Pearce did this type of experiment with great success. The subject, Pearce, would be in one building, then the researcher would be in another. The researcher would take out a deck of Zener cards, shuffle them, then draw through the deck and record the cards in order. The subject, far away, would record their viewing of each card through the deck. The results of each of them would be put in a sealed envelope and delivered to another researcher for comparison.

Similarly, decades later, the military program would have an outbounder researcher choose an envelope randomly from a group of envelopes, each with the address of different nearby locations. The outbounder would drive to the location and get out and walk around. Meanwhile, a remote viewer with no knowledge of the outbounders location would describe the scene the outbounder was experiencing. This also proved to be very successful in their research.

In both types of experiments, distance seemed to not make a difference. And in both instances, careful statistical analysis was done to discern the significance of their results. The early work at the Duke Parapsychology lab showed that these PSI powers, whatever they may be, can be used to discover information from far away. The military took that knowledge and utilized it throughout the many years of Project Stargate.