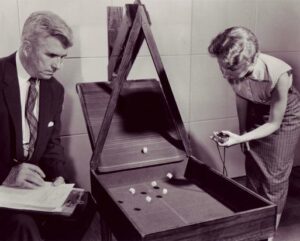 As is the case still today, in the early years of the Rhines’ research they had more things to research than they had staff or funds to dedicate to experimentation. Many of the letters J.B. Rhine was writing were to test subjects, fellow scientists, and potential funders. They were looking into many different modes of psychic experience. The lab was meeting with psychic mediums and dowsers as well as continuing to expand on their research on card guessing. They were developing new laboratory process to study phenomenon that hadn’t really been tested before, such as dice throwing. Rhine believed the ability of subjects to influence the roll of a die mentally was called psychokinesis, or PK. In the book “J.B. Rhine, Letters 1923-1939” we find that the researchers were impressed with the significant results obtained in experimenting with dice. As found on page 106:

“In a word, I have found that my subjects can throw dice in a way that suggests ‘Mind over matter,’ as the man in the street would say. This, of course, highly significant statistically or I would not mention it. It works with all kinds of dice and with all kinds so throwing, with about a dozen subjects, and regardless of what number is thrown for. The last test I have subjected it to is that of making it purely mechanical, releasing the dice and allowing them to roll over a course governed, except for the mind of the subjects, by the mechanics of the situation. I have found that the results are even better, the more mechanical the situation.”

The lab was experimenting and developing new ways of looking at these phenomena. They were questioning successful test subjects to try to find common qualities that might shine light on how the psychic phenomena operated. Subjects were asked about religious beliefs, unusual experiences, hallucinatory experiences, day-dreaming, intuition and many other things. He even asked about the experiences of family members and their favorite sports. The goal was to find out what other parts of their lives might be associated with skill in card guessing or dice throwing. These same questions are being explored still today. The Rhine Research Center in Durham, NC is doing research today into PK. Prominent PSI researchers Dean Radin, Helané Wahbeh and their team have found some fascinating information about psychic abilities running if families. But it was J.B. Rhine and Louisa Rhine and their team that set a firm foundation for research on these and many other areas of study regarding PSI phenomenon. In the book you can sense the enthusiasm, energy and sometimes frustration as they worked hard to open new doors of research.