↓
Home→Research→Zener cards in the lab 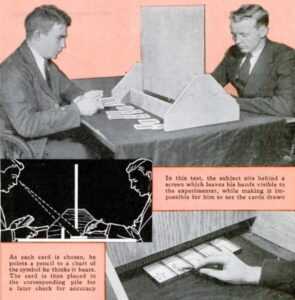 Zener cards are a set of cards that JB Rhine put to use for parapsychological testing. They were developed by Karl Zener while he was working with the Rhines in the early days of the Duke Psychology department. In a Zener deck there are 25 cards, five each of 5 symbols. The symbols are a circle, a square, wavy lines, a star and a plus symbol.  After the cards became associated with ESP research, Zener asked that they be called ESP cards as his research interests were not in parapsychology.

They have become part of our culture, we see them pop up in movies and TV shows and we know exactly what they are about. In the early days of research, they were used a lot, and they helped shape how ESP research was done in the lab.

The Zener cards can be used a number of ways in ESP testing. Their use helped JB Rhine and the staff discern ways to define and test for different types of ESP, such as the difference between precognition and clairvoyance.

The cards can be used in many different ways. The various tests involved a subject who is blind to the cards then stating which of the five pictographs was on the card in question. For example a researcher could take the Zener deck, shuffle the cards, then draw a card and as the test subject to state what symbol was on the card. The results were recorded, and then statistical analysis done on the results. Each symbol has a 1 in 5 chance of being chosen, so random guessing would expect 20% success. Testing methods varied. In some tests, the test subject made 25 choices, then the deck was examined to see the corresponding order of the cards. Sometimes the researcher and the test subject were in the same room, sometimes they would be in different rooms or different buildings. These varied tests gave the researchers insights into the limitations of ESP abilities. For example, distance between those being tested and the cards did not make a difference in success rates. A wide range of altered conditions were used to explore how ESP might work. Using the cards was simple and these tests were done thousands of times to gather a great deal of research data.

If you are interested in using the Zener cards yourself, you can order some here. 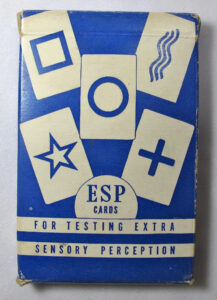 From the book:
“Early group testing in the classroom yielded little but chance results, but a breakthrough came when one of the highest scoring class member, Duke sophomore Adam Linzmayer, scored unusually well in an early individual test session, and then in subsequent testing continued to guess the ESP cards at a markedly extra-chance level. This success encouraged Rhine and his two graduate students to continue individual testing and in the next couple years to discover a total of eight high scorers from about 100 students tested. The most notable was divinity student Hubert Pearce who quickly reached even higher levels than Linzmayer and maintained that level without decline for a much longer period.”